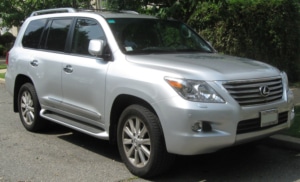 Need the windshield repaired for your Lexus LX? We will replace or repair your window for 1 year after for free, even if it’s from a separate incident not related to the first one. We don’t use cheap gimmicks to trap people into paying higher prices down the line. We offer honest service with fair prices.

We’ve been replacing windows and mirrors for the Lexus LX in the Phoenix Valley since 2001.

We replace or repair the following glass parts for Lexus vehicles…

Why Get Your Lexus Glass Repair Through Us?

The Lexus LX is a full-size luxury sport utility vehicle (SUV) sold by Lexus since January 1996 having entered manufacture in November 1995. Three generations have been produced, all based heavily on the long-running Toyota Land Cruiser SUVs. The first generation LX 450 started production in 1995 as Lexus’ first entry into the SUV market.

It’s successor, the LX 470, premiered in 1998 and was produced until 2006. The latest, third-generation, LX 570 debuted at the New York International Auto Show in April 2007 as a complete redesign for the 2008 model year. The LX is not available in Japan where it is manufactured.

The LX name stands for “Luxury Crossover”. However, some Lexus importers use the backronymic name, “Luxury Four Wheel Drive”.