BMW – Car Of The Future

Previous Next
BMW – Car Of The Future

Car of the Future as a Living Room on Wheels 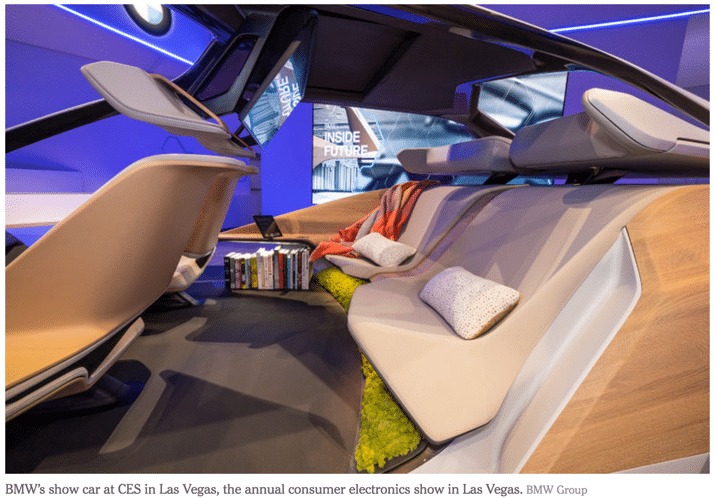 Swiveling seats? Movies projected across the windshield? Social media feeds on the windows? As driverless car technology develops, companies, design institutes and researchers are asking the question: What does the car of the future look like on the inside?

With companies like Google, Uber and others racing ahead to develop fully autonomous vehicles, the era of the driver hunched over the steering wheel may eventually give way to a living room on wheels. But with its long development lead times, designers are already thinking about how such technology will change the interiors of cars.

“When people are in an autonomous vehicle, their expectations will shift,” said Hakan Kostepen, executive director for strategy and innovation at Panasonic’s automotive systems unit, a major industry supplier. “They will want their personal space to become one of smart mobility, connecting them and relevant information to act upon.”

Article is from the NYtimes Website, here the full version here: https://www.nytimes.com/2017/06/15/automobiles/wheels/driverless-cars-interior.html?_r=1

In one concept, social media feeds were displayed on the windows and an all-glass roof, creating what is known as an augmented reality projection, providing contextual information on passing landmarks and approaching sights. As the vehicle drove by a restaurant, reviews of the eatery would be displayed and an online reservation form would appear on the building.

Video games would be integrated into the passing environment. Players could fire “weapons” at buildings, and then, via a projection on the glass, see the structure go up in digital flames.

Another group envisioned a vehicle’s interior as a constantly changing environment, using variable lighting and temperatures to fit the evolving moods and desires of each occupant, as determined through a sensor analysis of physiological and emotional states.